Servant Leadership: How to Balance a Team’s Needs with Yours 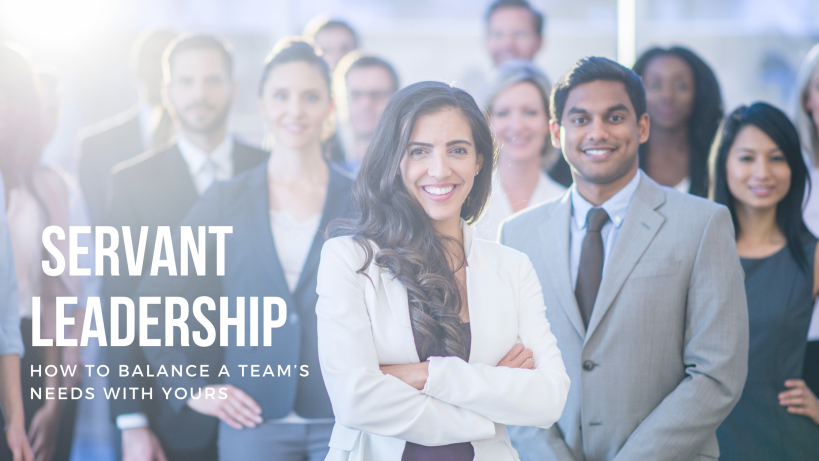 There has been a lot written about the value of being a ‘servant leader’. The concept has existed for decades, originally used in the early 1970s in an essay titled The Servant as Leader. But it’s become more popular recently, in the early part of this century. The concept of a servant leader is based on the idea of acting more like a follower (or servant) instead of fulfilling the traditional expectations of a leader. By building strength within the team as someone in service to it, as opposed to the head of it, leaders can build goodwill and trust. In other words, one who acts as a servant of the team, is ultimately better respected as the leader of it. But. As with anything, there are limits.

How do leaders balance the advantages of servant leadership with their own career needs?

You be the judge. Many of today’s leaders work hard to embody the ideals of servant leadership (also referred to as service leadership). But you also have to exercise judgment – there will be moments when considering what’s best for the organisation, or even your own career, might not accommodate a servant leader mindset. For the most part, that can be a productive and encouraging way to lead a team. Most servant leadership goals prioritise team members’ needs: being a good listener, displaying empathy, exhibiting self-awareness and building a community are all key to this leadership strategy. At the same time, leaders are people, too: we all need to feel motivated and engaged in the workplace. You should balance meeting the needs of others and making them feel valued, with your own needs to be recognised. A strong leader should make sure that his or her team members get credit for their work throughout the larger organsiation so that others recognise their contributions. But leaders must also participate in ways that reveal their own strengths: after all, they have a career future, too. Also, remember that despite the value of being seen as a member of the team, it doesn’t diminish the final accountability you have as the leader. Collaboration and strong communication skills will make your team feel better about decisions, however, you should beware when your own experience and judgment tells you another decision would be more appropriate.

Time will tell. Another challenge of servant leadership is timing — be patient with yourself, because learning to do this well requires more than an overnight transition. Servant leadership is almost always more difficult than ‘traditional’ leadership styles. Most of us come from a background where we are used to certain authority figures making the majority of the decisions. We then expect the same of ourselves – to demonstrate confidence and competence by bringing our own solutions to the table and asking our team to help execute those solutions. It takes time for both leaders and their teams to adjust to a servant leadership mentality. Some will think of this as a weak management style, others will think that even a more servant leadership-minded manager is too traditional. The original story that inspired Greenleaf was a book called Journey to the East. Importantly, the character that was the servant leader wasn’t recognized as a leader until after he disappears. Only then do his co-workers recognise his value. In other words, even the original inspiration for this leadership style demonstrated that this approach doesn’t always have an immediate payoff. Your value as a servant leader might not be revealed until a time when the team suddenly needs a leader and realises your value in that regard. You won’t necessarily need to disappear altogether but be prepared for a lag between employing these methods and being recognised for the effort.

Manage your motivation. All leaders give up some day-to-day duties as they ascend in the organisation. But it’s important that you stay connected enough to the execution to feel engaged. Your main role may be big picture, but that doesn’t mean you can’t crave being in the weeds now and again. Ideally you want to delegate what you can to others, and you want to create opportunities for others to learn and grow. But it can help you keep perspective as a leader and relate to the needs of your team, to occasionally step in and get involved. Plus, the sense of completion and accomplishment on more routine tasks can be satisfying: management decisions often are slower and less visible, and we all need to feel like we are being productive.

Being the best servant leader will sometimes mean leading instead of serving.

The value of servant leadership is well-documented and for many senior executives, there is a lot to be gained from practising the key tenets of it. There are also arguments for when to set it aside. Some organisations simply won’t benefit as well, or specific teams within a company may find it’s not the right style for them. For example, if your team is very inexperienced, they may be looking for traditional leadership to help mentor and guide them. Others may find that the way their teams are structured makes it difficult to support everyone appropriately with a service leadership style. Whatever your individual situation, if you find that the servant leadership style works for you, embrace it. Just be sure to embrace some balance that lets you serve yourself a little, too.

Category: Leadership
Tags: Business, Career, leadership, Servant Leadership, workplace
Previous Post
You’re Rethinking Your Business Strategy. But Do You Have the Right Leadership Strategy?
Next Post
The Risks of Building an Egocentric World: Yes, You Can be Replaced. (Sorry.)