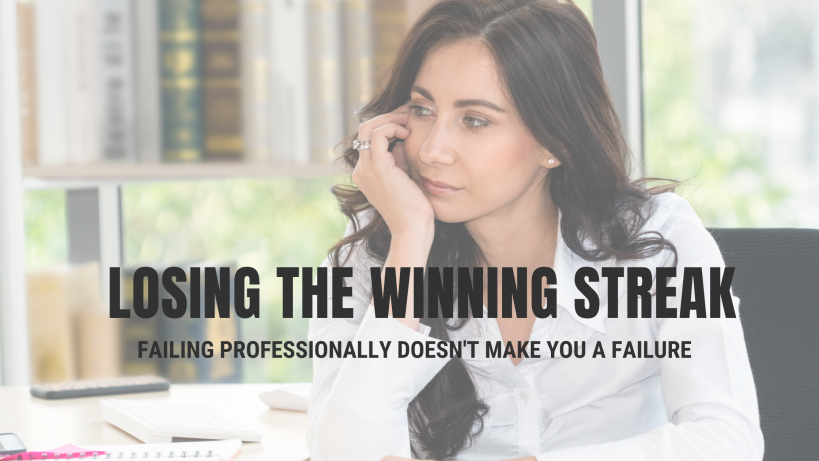 For many of us, fear of failure is a common challenge to taking risks, whether it’s speaking up, trying a new hobby or even challenging our assumptions. But some of us have been rewarded with extended periods of success, especially in our professional lives. For some, this can last more than a decade, even closer to two. This is rarely just good fortune: as the saying goes, ‘luck favors the prepared’. For a certain type of person, a rigorous mix of talent, discipline, and smart choices is the basis for ongoing achievement. While many would be thrilled to go ten or fifteen years without failing professionally, there can be a cost to continuous career advancement. Which is that, sooner or later, the long run of wins will come to an end. The reality is, very few people find themselves climbing the corporate ladder, securing one promotion after another, and landing in the C-suite without any significant interruption. And yet, the longer people go without a setback, the less realistic their expectations may become.

Failing professionally is normal: how to keep your head when you lose the race.

Past is not always prologue. It can feel devastating to be passed over for a top role after years of success. The unpleasantness of disappointment is exacerbated by the surprise of it. That might seem like a rarefied position to be in; one that doesn’t merit sympathy. But the truth is, not getting what we want builds a certain resilience. We learn to get good at getting back on the horse, so to speak. We remain humble and prepared for worst case scenarios. Most importantly, we realise that it is normal. It is a bit of a gambler’s fallacy, really, to expect to win every hand in the future, no matter how long a winning streak one enjoyed in the past. In theory, we understand that no one can win every race. Many of those who have succeeded for a decade or more have achieved a management position where they themselves have had to explain that to someone else. A team member who was not chosen for a new opportunity, or even lost their job entirely, was told that it was simply the mix of skills required did not align with what that person could offer. But even when one has spent many years being on the explaining end of that conversation, it can be tremendously upsetting to find oneself the recipient.

Try to control your response, not the room. The long streak of success can begin to create a feeling of almost inevitability of continued achievement. An unexpected failure can lead us to think something went wrong, that our performance faltered. In fact, we live in a world that is constantly evolving at a rapid and uneven pace. We are even at this moment living in the shadow of a pandemic, major war, supply shortages, inflation, volatile market conditions and changing workforce demands. Many organisations are testing out different solutions to multiple challenges. The needs of any one company at any given moment are a mix of strategy and circumstance. Being the right person for the right job is particularly difficult when what is right, is so unclear. For some of those who thought they were being groomed for a certain role, it can be devastating to be told they no longer are the right fit. But circumstances are changing constantly, especially in the last few years. Did you really fail, or did the environment simply shift in unpredictable ways? Before you blame yourself for some oversight or mistake, be more generous about how much you can control.

Success is relative. It is important to remember that failure is normal, it is relative, and it is often temporary. In addition, if you are unfamiliar with this feeling of defeat, you are by any definition a highly successful person. One negative outcome does not change that characterisation. In the United States, the average worker changes jobs every 4.2 years. While success can’t be defined merely by continuous employment with the same organisation, it’s telling that most people are not ascending corporate ladders unfettered. It is important to understand your own experience in the context of what is typical, then congratulate yourself for the history of wins. The American football player Tom Brady has seven Super Bowl rings. However, he has had 14 seasons when he didn’t win. He has failed to win the championship nearly 70% of his career. And he is considered by many to be the greatest football player of all time. No single loss has ever called that into question.

Realise that the winning streak, not the loss, was the anomaly.

It can be tempting to go into a fatalistic response, convinced that failing professionally this time is about to set off a chain of additional failures. That is unlikely. Anyone who has been able to learn, compete and succeed again and again has probably built the muscle to keep doing it. Don’t overindex a single event into a reflection of who you are or what you can achieve. The self-doubt can cause far more damage, making you change behaviours, take fewer risks, or make other unnecessary adjustments from a place of panic. What is most important is to build up a previously underutilised ability to be resilient. The first loss is going to be particularly difficult. You may immediately think something is wrong with you. But nothing is wrong, you just lost that day. It’s as simple and painful as that. Another win is within you.