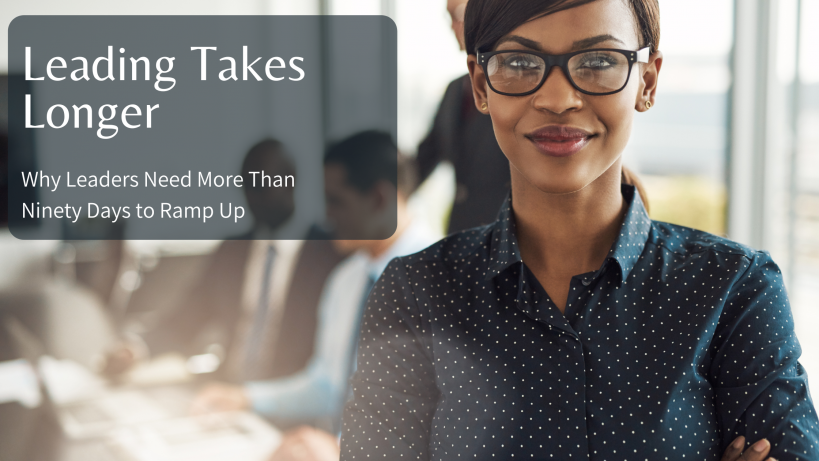 Much of the focus on The Great Resignation has been around the leaving from jobs. But the reality is that most of those who ‘resigned’ did not ‘retire’. They went on to new positions. There has been research that the first ninety days for a new hire are critical. But this has translated into an expectation that even leaders of organisations should be completely integrated within ninety days, which is a much more ambitious standard. For those at the highest executive levels, it will take closer to a fiscal year to fully acclimate to the organisational culture, understand the budgeting cycle and get to know the talent. For leadership positions at the c-suite level in large, complex organisations, three months is not nearly enough. These roles require far more time to become fully integrated and truly capable of leading the company.

1. Changes are challenging. People who move into a new role at the top of an organisation are more likely to be surrounded by others who have been there for years, decades even. The path to the c-suite is crowded and competitive, many people will have spent most of their careers with a particular company in hope of ultimate success. This can make the support for a new leader. . .complicated, at best. And even those who are not directly or indirectly vying for a leadership role, will have years of experience with the company in ways that can be difficult to override. Understanding the current climate of an organisation including its culture, politics, processes and values can take a long time to learn. If you are also responsible for reshaping, changing or even fully overhauling those elements, it can take many months, if not a year, to learn what needs to be changed and how to do it effectively.

2. Excessive expectations. This is an issue equally shared by the new c-suite leader and those around her. Anyone who comes in at an executive leadership level must have the confidence to believe they can do the job (after all, they have just been awarded it). But being capable eventually is entirely different from being able to effect a lot of change in the short term. Global organisations are rarely nimble. Supply chains, long-term agreements, investments in infrastructure and simple inertia make most corporate shifts slow ones. I recently wrote about the new pressures on CEOs and boards to respond more quickly to the roles they play in geopolitical and social justice issues. But for an individual who has only recently arrived, most necessary change takes time, even when the other decision makers agree with those changes. It’s vitally important for everyone to manage their expectations as to how much a new leader can accomplish, and to recognise that new leaders need more than ninety days to fully own their role.

3. The ‘Ted Lasso’ Trap. You may have seen the television series Ted Lasso, but if you haven’t, the basic premise is that an American football coach (Lasso) comes to England to lead a British football team. As everyone knows, American football and British football are entirely different sports with different rules and different equipment. While it’s the stuff of fun humour on television, it’s no laughing matter when a new leader comes into an organisation with expectations that the rules of their last employer apply.

It takes equal parts humility and curiosity to shed the instincts and behaviours that worked in the old place. But when you are the leader of an organisation, people may be less willing to tell you that you’re getting it wrong. Equally, you might be more confident that the skills that earned you this role, do not need adjustment for this role. You will deal with everything from different government regulators to new competitors and unfamiliar vernacular. Even if you are moving directly lateral – say CEO to CEO – you are playing a different game, with new officials and unfamiliar players. You must earn the trust of your own team and learn the language of this particular place.

Whether you have just transitioned into a new leadership role, or working with someone who is, the important thing to remember is that the early days will not be a good measure of ultimate success. The higher you go, the more nuanced the hurdles to integration will be, therefore using a fiscal year – and not ninety days – as a baseline may be more appropriate. Be open early and often with a new leader about what are appropriate expectations, goals and timelines. Adjust throughout the process. Communication is key, as always, to balancing new ideas and unnecessary disruption. It is perfectly natural to have high hopes and expectations for a key decision maker brought in to affect change. But it’s important not to let the enthusiasm override the achievable. Even the most effective leaders must be given time to learn the rules of play on a new field.