Just Give Them the Remote: How to Beat the Great Resignation at its Own Game 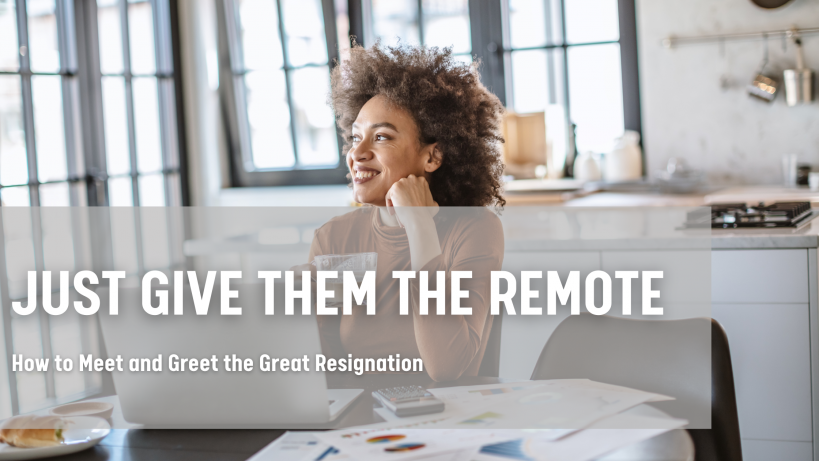 Just Give Them the Remote: How to Beat the Great Resignation at its Own Game

The Great Resignation is not just a real thing; it’s a movement. A recent report stated that more than 50% of workers want to make a career change. Now I understand that “wanting” to make a career change is not the same as leaving your job. But the jobs reports in the U.S., from  official Labor department updates to more anecdotal articles in the media confirm that this is a jobseeker’s market. Nor is this limited to the United States. In the U.K., for example, one in four employees are seeking a change. So the “great” part of it is verified and aptly named. The “resignation” part of it is a bit more complicated. In fact, I think resignation isn’t the right word at all. And I think that organizations who think about this moment in that way might not recognize all the potential it has for them.

Why the Great Resignation isn’t about being resigned to anything.

Forget the stigma. First of all, if you’re an employer, don’t even think about the shaming that resignation usually denotes. In the simplest form, yes, many people in the market right now are no longer working where they were in 2019 or early 2020. And a large number of them did resign voluntarily from a state of active employment. But when we talk about those who “resigned”, we need to consider what sentiment or scenario that term traditionally evokes. When we think of someone turning in their resignation, or a company announcing they have sought someone’s resignation, it usually implies that the person has underperformed or behaved poorly. Frankly, it’s usually an act that is technically voluntary by the employee but undesired by them. It’s code for was-about-to-get-fired. Now it’s code for surviving-a-pandemic-and-rethinking-my-life.

They didn’t resign, by any definition. The term Great Resignation also is misleading because in 2020, many people were furloughed, or took time off in order to care for children at home, or to protect high-risk household members. Some people were laid off for months because the business they were in had to close due to legal restrictions or was unable to survive financially within the confines of the restrictions. These people are in the market after months, even a year or more, for reasons that have nothing to do with their job performance. Many of those people had time to think. And while some are leaving because they are afraid to go back due to health reasons, some decided they wanted something fundamentally different, whether to work in an entirely different field or start their own business. Or just wait it all out until they figure out what that next thing is.

How to make the Great Resignation actually great? Lean into it as an organization.

This can be a nightmare or a godsend. Up to you. We are brushing with broad strokes a very diverse community of job seekers, and this term risks painting them with an outdated stigma. Today people are leaving jobs, or not returning to jobs, or turning down new opportunities that have nothing to do with performance. They haven’t done something “wrong” professionally.

Category: Careers
Tags: career change, great resignation, Kovach Consulting Partners, Robert Kovach
Previous Post
The Transition IS the Competition
Next Post
Major Companies Had To Leave Russia. The Road Back Might Be Longer Than It Looks.