I Want to Improve the World of Work. Yes, Really. 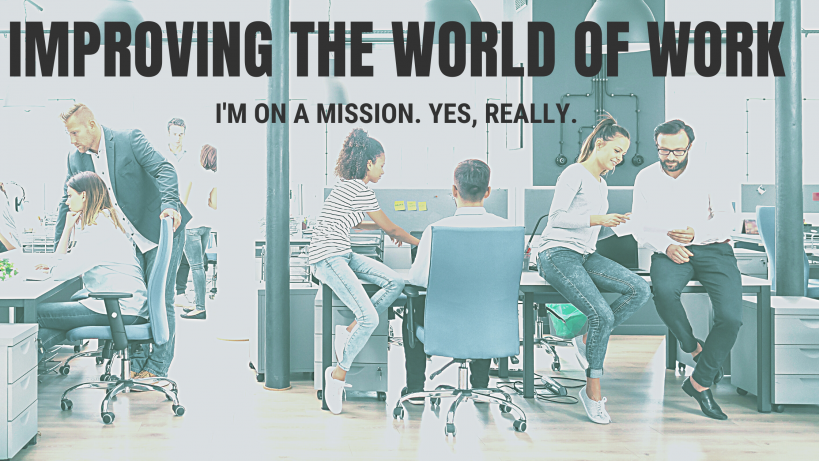 Over the years, I’ve returned a few times to the text of Steve Job’s 2005 Stanford commencement speech. It’s pretty well known but if you’ve never read it, I’d recommend it. There’s a lot in there (though it’s not very long) and I always find I see something different in there each time I read it, given what else is going on. Right now, I’m just starting up my own consultancy. I wrote about this before and I’m excited and a little nervous and overwhelmed and delighted. I don’t know how to do everything I need to, but I do know this is what I’m supposed to be doing right now. I’ve been thinking about how great that feels, to know I’m doing what I’m supposed to be doing. There is a part of the Jobs’ speech that resonates in particular right now: “Your time is limited, so don’t waste it living someone else’s life. Don’t let the noise of others’ opinions drown out your own inner voice. And most important, have the courage to follow your heart and intuition. They somehow already know what you truly want to become. Everything else is secondary.”

The last year has been unusual because it was a pivotal one for practically everyone on the planet. Everyone had a journey of some sort, their life disrupted in ways that were either at best merely inconvenient or at worst absolutely devastating. But the comprehensive nature of the pandemic meant that we were all living an unprecedented moment in our lives, all at the same time. Many people are just now beginning to figure out what comes next. And that’s ok. We’re not back to normal, by any means. We’re maybe just getting to less abnormal — kind of recognising a vaguely familiar version of the world. In my case, I’ve been able to take some of this time to really redesign where I want to go next professionally, as I discussed before. To be clear, it certainly hasn’t gone exactly to plan – the new website that would definitely take six weeks has taken twelve (I have a lot more opinions on fonts and colours than I realised!). The “pandemic pounds” that I put on have been more resistant to leaving than I’d like. And no, I didn’t learn a foreign language, despite high hopes to use the “extra time” the pandemic gave me. But I did spend a lot of time doing what I described here as active recovery, really consciously thinking about how to move from one major stage of my life to the next.

And what I have decided, is that I’m on a new path, and it’s the right path professionally. I’ve made a pretty bold decision:  I’m on a mission to improve the world of work. Yep, mission. And “mission” isn’t a word I was entirely comfortable with, for quite a while. It can sound too ambitious, too dramatic, just too grand. However, I’m sticking with it. I really believe that after more than 25 years in and around organisations and senior leadership, coupled with a deep and constant study of psychology (especially organisational psychology), I know how to make work a better place. I know what makes leaders better at leading. I know how to make teams more than just a group of people. I don’t expect I’m going to personally improve work life for millions of people. But leaders can have a massive impact throughout their organisations. If I can help one leader improve a team of five, or fifteen, or fifty, that dynamic often replicates itself. The changes could impact 100 people, or 500 or 1000. If I reach 10 leaders, well . . .  the math is the math.  So, yeah, I guess I’m sticking with that’s the mission. People spend an awful lot of time at work, and an awful lot of energy not as happy as they could be while they’re there. There’s something both relatively modest about the goal (I want you to feel more confident, more satisfied, more successful at work) and scarily ambitious at the same time.

I hope that others find a way to take this new opportunity, this slow re-awakening of the world to also commit to doing what they ought to be doing. Millions of people died last year. We’re still here. So let’s make good choices. That should be the mission.