Tell the Truth – Do you Have Management Courage? 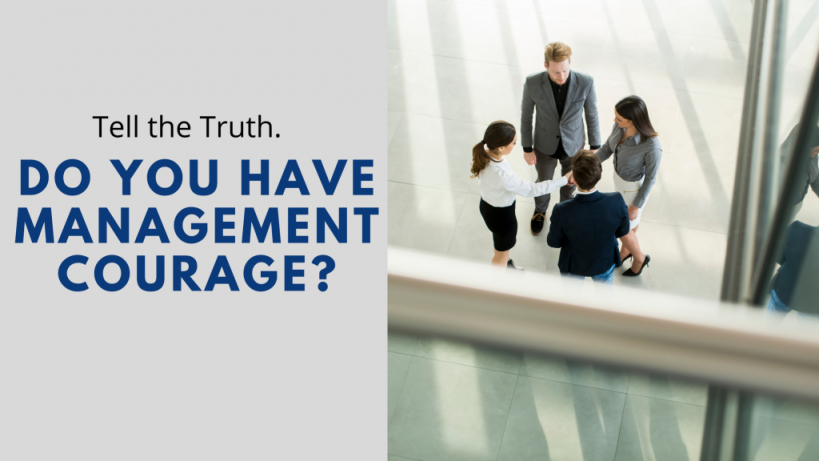 It probably will not surprise a lot of people to hear that being a leader requires courage. You have to make critical decisions about an organisation’s future, for your own success as well as your team’s, and live with the consequences of those decisions. That’s all true, of course. But I’ve been thinking quite a bit about management courage specifically, and how it relates to the effectiveness of leaders. I’ve seen that the most effective leaders over time do not struggle with management courage. While many people may be promoted to leadership positions in the short term, over time, the stronger performers also have the ability and confidence to exercise this specific sort of courage. In fact, I feel that identifying management courage in potential leaders can be a marker of likely success. And I think in our current challenging, unprecedented business environment as we come out of the pandemic, it’s going to be more important than ever.

What is management courage? The ability to tell the truth.

As already mentioned, there are certain types of courage that immediately come to mind in leadership contexts with regard to risk related to actions. But management courage is, in part, about effectively communicating truth, even when – especially when – it’s not easy or in that leader’s self-interest. It’s important for leaders to have the courage to make the right decisions when it comes to profitability, or technological readiness, or personnel decisions. But frankly, they’re getting paid for that. And those decisions align with their own needs – to be seen as effective, as capable, as the right person for the job.

The cost of candour. Management courage can actually be against your own interest, especially when you have to exhibit that courage to your boss.  Telling someone you report to that their assumptions are flawed, or that they are exhibiting bias, or that they have a professional or personal conflict – these are things one might know to be true, but are not exactly politically ideal to share. Some leaders will obviously not respond well to team members who tell them the truth. They may readily seek people who simply validate their opinions and decisions. It’s almost always easier to be that person in the short term. . .and it very often backfires in the long term. And perhaps most excruciatingly, you will probably suffer from the very issue you should have been honest about. We’ve all had the classic double hit when something not only goes wrong, but to add insult to injury, we totally knew it was going to go that way, and chose not to stop it.

Down with the truth. To be clear, it’s not necessarily much easier to tell the truth to someone who reports to you than it is to say it to your boss. Can you tell someone that they won’t get that promotion and help them figure out a path to their next career step?  Not because there isn’t budget, or they don’t have a language requirement. Because you don’t feel they exhibit the right capabilities and aptitude. In other words, can you be honest when honest is hard. When you report truth up to someone above you, you put your own future at risk. When you are honest with someone whose future you control (at least in the short to medium term), you acknowledge that power openly. You’re unlikely to win that person’s affection in the moment. But, you won’t be accused of hiding the ball later, or putting them in a position you thought they were likely to fail in. And – admittedly in your own interest – you protect your own reputation for promoting people you truly believe in, as opposed to for ease or politics. And while it might be counterintuitive, it can be more difficult to tell the truth to someone on your team, because you can manage their decisions. Whether that is not following their advice, double checking their work, covering for their mistakes – you can avoid the truth, if you can manage the outcomes.

Telling someone the truth reveals character and can inspire confidence in the long term. We trust people who tell us the truth, even if we are not always receptive to that information in the moment. After all, the person who tells you when you are making a poor decision, gains your trust when they tell you that you are making the right one. The latter is easy, and curries favour. The former is not, and risks alienation. The requisite complementary skill is to tell truth with sensitivity as well as transparency. That doesn’t mean being “diplomatic” which can really mean telling the parts of the truth that will sting the least. That isn’t management courage. Don’t soft sell the problem or withhold key information. Grapple with tough issues and get it out on the table. Do so artfully, which means telling the whole truth, in a way that keeps a person engaged. That includes everything from how you tell them (an email might not be right), when you tell them (sometimes early as possible is better) and why you tell them (it’s not an opportunity to make them look or feel bad). At the beginning, I said the best leaders over time are those who are successful at management courage. I believe doing it well is an acquired business skill like any other. And the better you are at something, the easier it gets to do it. You won’t always get it right, but it will be worth it. And that’s the truth.