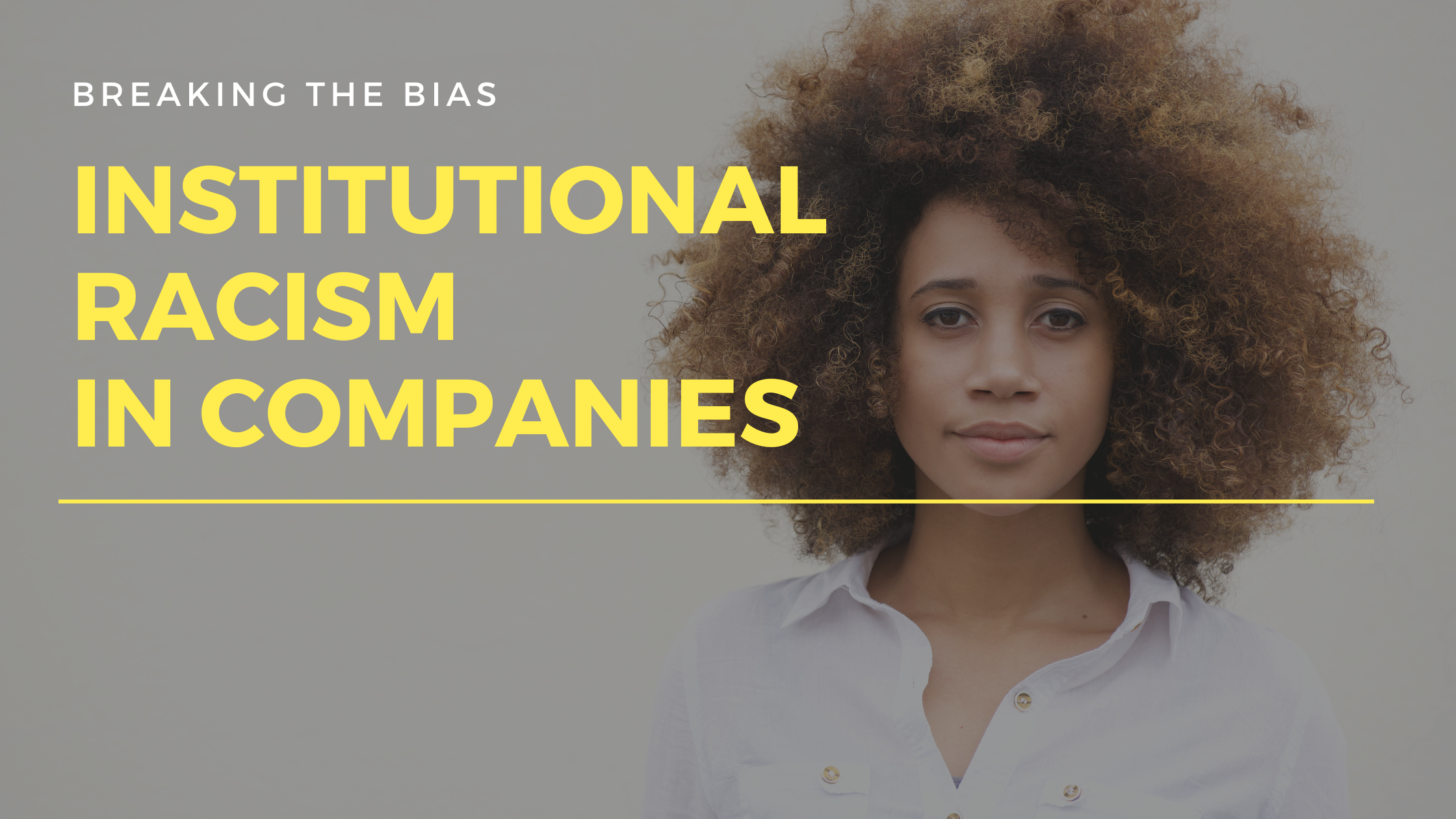 One issue for companies is that companies are made up of people. Seriously – we sometimes speak breathlessly about what a company does as if it is a living breathing thing, be it monster or miracle, making choices independent of any human force. Organisations are not progressive or traditional or inclusive or not; the people who work in them make decisions that support – intentionally or not — a corporate culture and develop a reputation. That said, there are both individual acts and collective choices that happen inside of companies that are different from individual private acts. When people speak of institutional racism in companies, or systemic racism at work, it can be useful to think of it as a conflation of acts by many people within a shared mission – here a for-profit company, but it can be government or a university, of course.

Institutional racism in companies is real, but not insurmountable.

Affinity bias is real. One challenge to hiring more and more diverse people is it can require fighting a tendency we all have, which is to get along more naturally with people who look like us. Referred to as ‘affinity bias’, we tend to like people we can relate to. It’s just easier – if I meet a Chicagoan turned longtime Londoner who works for a technology company, well, there’s about a hundred conversations we can have right off the bat. It’s perfectly natural, and it’s not inherently wrong, per se. Why do the hard work when you can take the easy way? Because the historical hiring patterns, especially the higher up the professional rung you climb, are overwhelming male. And white. And Christian. And straight. That can lead to institutional racism in companies – not because any individual is necessarily antagonistic to other backgrounds, but because race-based connections overly influence many decisions and create an institution-wide status.

So the fewer of those traditionally dominant traits you have, the fewer of such people in decision-making roles relate to you easily and immediately. People who are not part of the majority demographic in the corporate world were less likely to socialise with them at university, less likely to live among them, and are less likely to connect with them in an interview. White, straight, Christian males are disproportionately in charge of hiring and promotion decisions, and so they can – even unconsciously – perpetuate the advances of people like themselves. It’s *not* a matter of people saying they hired someone because they’re white (to be clear, that *is* racism, plain and simple). It’s they hired someone they could easily imagine working with, mentoring, and just generally getting along with because they could see themselves in that person, literally.

But it doesn’t have to be that way. Especially if you are aware of that bias and actively take steps to counterbalance it. We can find other things to connect on that are not related to how we look or what we are. It takes more effort, obviously, because you can see race and gender and instantly know if you’re part of the same group. It takes conversation to know you support the same football team or grew up in the same part of the country or share other interests. Overcoming institutional racism in companies can require top down direction – actively seeking out candidates from underrepresented places and groups. The more you see people who are not like yourself, the better trained you become to find other, less obvious common interests, shared goals or other ways to connect.

Diversity isn’t charity; it’s advantageous. There’s also a lot to be said for embracing a lack of things in common, not only with regards to personal growth, but also professional success. Women bring a perspective that men simply cannot; immigrants by definition have seen other ways of doing things than those who are native born. There’s both personal growth and competitive advantage to be gained by having as many different eyes as possible looking at a strategy or solving a problem.

You can’t walk in someone else’s shoes, but you can observe their path. Another simpler, more individual act (but to be encouraged on an enterprise-wide level) is to just be mindful of what black and brown colleagues might be not saying. While all of us are struggling to maintain a professional demeanor over video conference, there are those amongst us who are doing so with a particularly heavy heart. In addition to worrying about sending children back to school or not, some also must worry if their children are stopped by the police. In addition to worrying about keeping sane while social distancing, some also must bear the heavy weight of feeling isolated or alienated due to the colour of their skin. Everyone needs to be cutting everyone a little extra slack these days – but some of us deserve it even more than others.

Institutional racism in companies ends the way it started – with individuals.

Those of us not directly impacted by the current state of race relations can be particularly mindful of showing grace and tolerance to those who are, even if they do not say so overtly. And as I mentioned in a previous article, success professionally does not exempt black and brown colleagues from the pain of racism. Don’t assume that the person who works next to you, or lives next to you, experiences this moment like you. Prosperity, unfortunately, cannot buy equality. But open minds and thoughtful acts can give it freely.