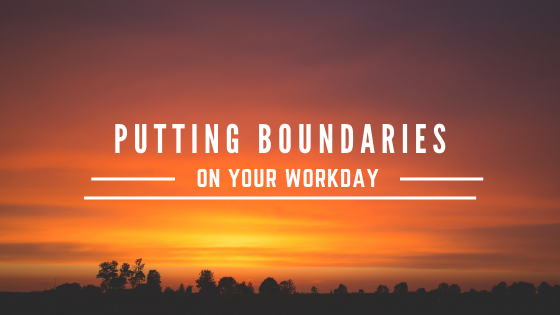 Anyone who saw an episode of Mad Men had to notice the Sterling Cooper Agency workday hours. Sure, there were occasional late nights where Peggy and other junior copywriters spun their wheels all night trying to find a witty way to sell cola or toilet paper. But really, most days Don Draper was headed home before sunset. Fast-forward to the era when the show was filmed, not set, and putting boundaries around your workday feels as doable as the three-martini lunch.

Putting boundaries around your workday is vital. No, really.

Why set boundaries? Because you need them. They say fences make good neighbors, and this applies to you as well. Putting boundaries around your workday – mental fences, basically – means you’ve got the space you need to fully focus on non-work things. Like, relationships. Self-care. Other hobbies and personal interests. In The Americans they had enough time after their travel agent day jobs to steal state secrets. (I’m not recommending that.)

Whatever you fit around your workday needs space to fit it into. And your mind needs the space too. You need some mundanity. You need to daydream. Waiting on hold for the cable company while also replying to work email is a multitasking necessity of life. However, what you can do doesn’t mean you should do it all the time. It stresses us out, little by little. After all, you can hold your breath, probably for a minute or more. And sometimes you need to walk to, to pass a bad odor or be under water. But we don’t do it that often because it’s tiring and unpleasant. But our lungs are better at setting boundaries than our brains are.

Set boundaries for yourself. Set an example for others. If you’re a team leader you not only need to take time off because you need it. But because you need productive, engaged team members and they’re following your lead. Years ago a friend told me that early in her legal career there was a female partner – of which there were few at that time – who called into a conference call from her hospital bed. While in the early stages of labor. That’s madness. But it was spoken of with awe and admiration. Presumably by the men.

Not only were the young female lawyers unimpressed, they were horrified. The message they heard was that this was the price you pay if you’re both a successful lawyer and the gender that has the non-delegable role of childbirth. How many future leaders opt out not because they don’t have great judgment and values but I daresay because they do?

It’s not radical. Imagine the time you’ll have if you stopped working, at the same time, every day. Roughly the same time, at least. Things happen, and you’re about to be a pioneer in the mission to start putting boundaries around your workday. But what if you could truly stop checking your email, not send one more text to a colleague, not make another work-related note in the diary today, about what to do tomorrow? Preposterous. Radical. You probably hear the office sliding down the street and into the sea even as you read this. The crazy, radical thing is that it really isn’t – and you’ve done it in the past.

Not only are you capable of putting boundaries around your workday, you’ve done it before.

Here’s when it happens – you get a really unfortunate bout of flu, where getting out of bed is simply not an option. You end up sleeping for twelve hours – one of the few truly unplugged zones left, apparently – and finally, a day or two later you emerge to try and scan through work emails. There are dozens at least, and possibly hundreds.

And yet. The office is not underwater. Even the most urgent email has somehow gone unanswered by you and been resolved or postponed. No matter your title, no matter how vital, you’ve technically already been forced to put limits on a workday. Heart surgeons do it. And presidents. And so can you.

Category: Workplace
Tags: #boundaries, #scheduling, #worklifebalance
Previous Post
Personal Resolutions are a Choice. A Professional Legacy is a Decision.
Next Post
Signs of a Leader (Hint: They might not be the boss.)