The Bottom Line on Loftier Goals: It Might Be Gen X who make CSR relevant 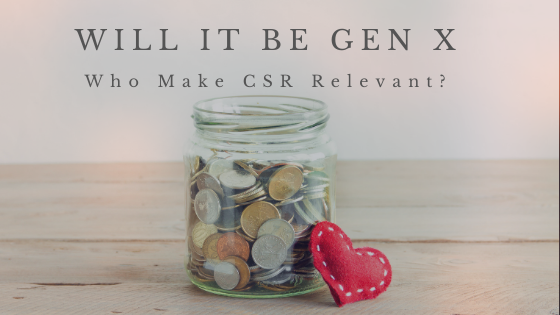 As we discussed in an earlier post on Millennial recruiting, 85% of Millennials in the US said they wanted their company to provide CSR opportunities for them, and 64% said they will not work for a company that doesn’t, according to this study. Companies are quickly shifting how they invest in CSR as a necessary part of business. That’s driven by Millennial prioritisation of employee and consumer decision-making. But it might be Gen X who make CSR relevant to the business model, financially, and not just ideologically. They have the track record, and moment-in-time advantages that uniquely position them to do so.

The history of good works, at work. Corporate social responsibility is not a new concept. It has taken very different forms since at least the 1940s when Hormel, maker of Spam, participated in a World War II government initiative to help provide food supplies. In 1964, Atlanta-based Coca-Cola insisted on honoring Dr. Martin Luther King, Jr. for his Nobel Peace Prize, over the objections of local conservatives. (The CEO even threatened to move the company if they did not acquiesce.) In the 1980s, actor Paul Newman established his Newman’s Own food line, which donated profits to charity.

Trickle-down (socio)economics. The changes in CSR often reflect the times culturally and politically on a broader scale, as well as the local community’s needs. But until recently, most of these efforts were not central to the organisation. They might well be mentioned in the Annual Report, or in a press release to the local media. But they rarely were publicised or treated as a central part of the organisation’s goals or identity. In some cases, this might have been a conscious decision not to look self-congratulatory or subject to questions about the impact of the commitment. But probably most importantly was neither employees nor customers made decisions about their relationship with the company based on its CSR efforts.

The value of being charitable. Flash forward to the last 20 years. Shoe manufacturer Tom’s is selling not only footwear, but an ideology. Same for Ben & Jerry’s or Whole Foods. To be clear, some of the most committed organisations are not newer or trendier consumer brands but traditional Fortune 500 and FTSE 100 companies like GE, Microsoft, and my own employer, Cisco. Regardless of your assessment of the actual contribution of these companies, or for which causes they advocate, the CSR profile of a company can materially impact its public reputation, recruitment and – maybe its financial success.

Can a ‘Slacker’ create the corporate backer? Generation X is now the predominant cohort in upper management and executive roles. As decision makers, it might be Gen X who make CSR relevant because of their unique era. They might be the best positioned to affect the change management of CSR from effectively a corporate side hustle, to a major contributor to bottom line success. At once practical and innovative, raised in the materialistic 1980s, but (in)famous for their laid back attitude, Gen X both understand the practicalities of capitalism, and the existential need to improve the common good. They can take the philosophical and turn it into something financially viable.

The wealth of the World Wide Web. It’s quite possible that Gen X will be best remembered for their contribution – creation, really – of an economically relevant Internet. Something that was built as a tool of the military, and morphed into something interesting, was converted into a communication and business platform that has completely reshaped our way of life. E-commerce shifted the Internet from curiosity to integral business component. The Internet still remains a place that has fun and interesting components, to be sure, but its viability and ongoing development is sustained by its monetisation.

CSR and ROI. And so, perhaps who better to move CSR from a charity-based concept to a business goal, and a pillar of the brand. The companies who are most well-known for CSR are those whose business concept and social ideology are virtually indivisible. This isn’t a mere sales tactic – it can’t be. It’s moving CSR from the liability to the asset column. It’s evaluating ROI of CSR goals with the same rigor as sales targets. It’s centering marketing strategy and customer experience around social commitment. The early dot coms weren’t different commercially. They were selling the same stuff as brick-and-mortar stores. But the experience was the USP. The excitement of instant, always available, totally private purchasing decisions was part of the product itself. How else did online-only businesses compete against and essentially defeat brick and mortar book stores? The Internet could have been a young person’s fad. But Gen X made it not only self-sustaining, but a competitive advantage. Today, no major company (and few local ones) don’t have an online store.

What better assurance is there of protecting CSR from being the easy target in years when cost-cutting is a priority. If CSR is not only self-sustaining but actually part of the product, the brand, the organisation itself – then CSR commitments are not only accommodations but drivers. Millennials are credited – and rightly so – for creating the market for more CSR efforts. But it might be Gen X who can make CSR relevant, who can turn CSR into the product that profits not only the world, but the company. And if you run a good company, are therefore more profitable, you can do more good things for the world. They can quite possibly eradicate the whole distinction of corporate social responsibility from just corporate. Some would say there is no world where CSR is virtually the only way to do business. Perhaps we underappreciate Gen X’s track record – but they did completely overhaul the consumer experience. After all, when’s the last time you went to a travel agency to buy a plane ticket?