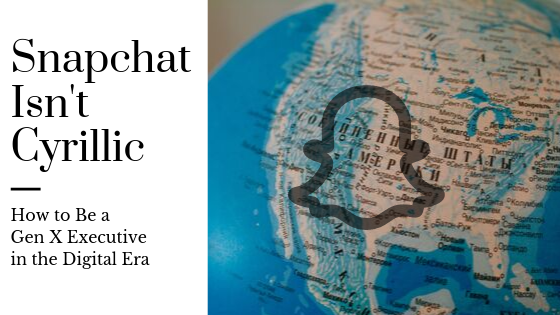 Today, the Gen X executive in the digital era faces a lot of challenges, many of which were literally unimaginable when they entered the workforce in the early 1990s. The pressure to manage the ever-expanding suite of social media platforms can itself be overwhelming. But, as daunting as it is, I reassure many who I coach by offering the following perspective. In 1991, I went to Budapest to teach MBA students, senior managers and executive leaders at the first Western business school in what was then Eastern Europe. I worked with leaders from many different countries. The Cold War had (mostly) ended. The Soviet Union was rapidly advancing toward ‘formerly known as’. And these businessmen (yes, all men), senior managers and executives in their 40s and 50s, rising stars, were eager to learn about Western capitalism. Indeed, they were about to start a new era in their lives.

It wasn’t supposed to be that way. These men had enrolled in courses like mine because they were ambitious and hard-working. They were not at all resistant to what was nothing short of an empirical shift of the business model they had been trained in. They were happy to adapt their high-flying executive-level careers to the quickly Westernising business environment. Multinational corporations from the United States, United Kingdom, and other parts of Western Europe were bringing in a new wave of opportunities.

There was just one obstacle — well, two, really. The first was overcoming such a fundamental difference to controlled markets in the Communist era they had always operated in. At the end of a lecture, a leader told me he understood capitalism save just one question. He was still unclear at what point the American government set the prices for the goods sold.

And yet, translating (successfully) the concept of free markets would turn out to be the smaller obstacle. The other problem was as simple as A, B, C. Literally. These men had been raised in an era where Russian was the language of international commerce and trade, not English. English was more an amusing hobby, mostly pursued by female students whilst preparing for a secretarial career. Suddenly it was an imperative skill set to speak, write and read English to a high level. The time and energy to accomplish this when you were already a busy executive was daunting to say the least. Imagine being 50 and told you have to learn a new language, let alone a new alphabet, moving from Cyrillic to Latin.

In the end, those businessmen soon found themselves accelerated to the final stages of their career. They held out as long as possible, focused mostly on being able to send their children to university — where they presumably spent a great deal of time learning English.

However, ultimately, most did struggle to survive in the new economy. It takes even the most diligent student years to acquire business-level fluency in a foreign language, especially one that doesn’t even share an alphabet with your mother tongue. The not unimportant upside was that nothing breaks a glass ceiling for women like a rapid and comprehensive dearth of male candidates. (Think American and British WWII factories.)

So, having established that Snapchat is not the threat to your career that it might seem. Here are tips on keeping perspective as a Gen X executive in the digital era.

1. Stop freaking out. Ever seen the Cyrillic alphabet? Take a look. Whatever you find intimidating about Instagram, Snapchat, Twitter, Facebook, whatever, should snap you into perspective. Find a YouTube tutorial or a teenager and realise that you’ve got this. Seriously. We tend to panic in the face of change — that amygdala hijacking that makes us want to fight or flee. Recognise that your reaction is normal, but disproportionate.

2. It’s fast, but it’s fleeting. Instead of panicking about the constant and rapid evolution of apps, social media platforms, ROI metrics for engagement and everything else, remember that you don’t have to be fluent. Whatever is the “it” app of today is already so last week. You do need to be conversational in the major platforms. But do you need to be fluent? Don’t resent constant evolution; embrace it. See it as a justification for accepting a standard of “good enough”.

3. Don’t compete with Gen Y. Co-exist. One of the great assets of Gen X is that they are highly adaptable — caught between two massive generations, they can translate from Boomer to Millennial with ease. You don’t need to be better at technology than Gen Y; you just need to be better at something else. A lot of what Gen X has is plain ol’ experience. Better instincts, clearer understanding of their strengths, increased resilience, more appreciation for why we did things the way we did, and best evolution of what no longer works.

And some of your particular experience – generationally specific traits – created admirers. You were once the impressive new arrivals, too – see this 1998 article about Generation X, and you will be amused at how ‘computer-savvy’ you were back then, ‘growing up with computers’. Sound familiar?

Is it impossible for the Gen X executive in the digital era to adapt? Nyet.

For those businessmen in Eastern Europe and the Soviet Union, the emergence of the West as the dominating business culture signaled a true empirical shift. The changes were ultimately too much, too fast, for many to adapt. The impact on their careers was catastrophic. They panicked, and rightly so. The end was nigh. But for Gen X, the shift is manageable, even master-able. When in doubt, pick up Dostoyevsky. In Russian.

Category: Careers
Tags: digital era, executive leadership, executives, Gen X, generational change
Previous Post
It’s Not a Small World, After All: Understanding the Needs of a Global Workforce
Next Post
The Bottom Line on Loftier Goals: It Might Be Gen X who make CSR relevant