Step Away From the Mic: Using 360-Degree Feedback Effectively at Work 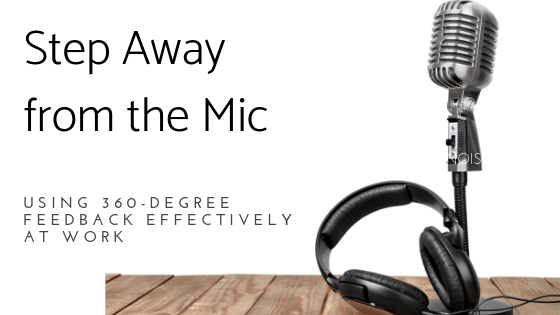 Second in a two-part series. This is the second of two posts about how to use 360-degree feedback. Last time we discussed why this method of assessing performance is problematic. This time: better ways of using 360-degree feedback effectively in individual business relationships.

Everyone has been at a music concert, or listening to a lecture, when someone steps up to the microphone and instead of a human voice there’s nothing but that horrible screeching sound that tries to pluck your eardrums out of your head. It’s the feedback that results when the microphone and speaker are too close together. As it happens, there’s something to be learned from that, because using 360-degree feedback effectively in business is also better when there isn’t a lot of squawky interference.

If you read any A/V manual, you’ll learn that the cause of that terrible feedback sound is distance — specifically, not enough of it. The loudspeakers and the microphone are in such close proximity that you’re creating a loop. Think of it as an audible hall of mirrors. The mic is picking up not only the real voice of the presenter, but also the amplification of the voice from the loudspeaker. And the speaker now amplifies the real voice and the amplification that the mic picked up, which goes back to the mic, which goes back into the speaker, which . . . sounds just as awful in real life as it does in this description.

Speakers and listeners will need some distance. As it happens, the solution for eliminating feedback between the mic and the sound system applies equally well to using 360-degree degree feedback effectively. In a business setting, we need emotional distance — when we’re receiving feedback from someone it’s hard not to personalise the negative stuff. We tend to focus on the bad news, not the good. (Haven’t you ever read a bunch of comments on a review and blown past all the positive remarks to fixate on the critical ones?)

One way to do this — lower the stakes. Last week’s post detailed why you shouldn’t make 360-degree feedback an integral part of performance evaluations. And just one of the (many!) reasons why is because when feedback from multiple people has an impact on your performance assessment, it’s going to be impossible not to overreact to every comment from every person. (If you want more detailed evidence of why 360-feedback in performance evaluations is a terrible idea, I refer you back to this excellent article I mentioned last time, written by my colleague and his co-author.) This leads us to the next tip in preventing A/V feedback, which quite conveniently can also be applied here:

Reduce the number of vocalists. When you have multiple vocalists, that’s multiple mics. There’s an increased chance that one of those is going to get too close to a loudspeaker, and it only takes one to cause the dreaded squawk. It’s the same thing that makes using 360-feedback effectively so difficult — too many voices being heard. Instead, you need to use one-on-one meetings with each member of your team. Don’t try to gather feedback from a bunch of people, with a bunch of views, and make one narrative out of it. You’re not leading a choir; you’re connecting with individuals. Right — now that you’ve got it down to individual conversations, there’s another feedback interference tip that we can borrow from the mic and loudspeaker scenario:

Create an optimal listening environment. In the sound system context, this leads to soundproofing and moving amplifiers and microphones, all with the aim to reduce the risk of squawky sound that drowns out an enjoyable listening experience. You can do the same. Create an environment that is most conducive to using 360-degree feedback effectively. Specifically, this entails both gathering the feedback via one-to-one sessions and considering how you frame the conversation. So, what to ask? Two things:

“How are you experiencing me now?” This keeps you focused on them, not on you. You’re not asking “what am I doing wrong?” or “what do I need to improve?” in a way that is a verdict of your performance. You’re simply getting a better understanding of their perspective, at this point in time. Which is particularly important if you’ve worked with these people for some time. (It might not be relevant for people who have no experience of working with you.) It’s entirely possible that there are things you naturally do that they find really works for them, but wouldn’t be relevant in the context of evaluating you. That potentially risks valuable information being lost. But now, because they are being introspective on what matters to them, they’ll naturally prioritise articulating what they need most.

“How can I make the team experience better for you?” is the other question to ask. Framing it in this way makes it much easier to hear the specific things you should do to be responsive to each person. Instead of hearing things in terms of what you should do differently – in other words, your weaknesses – you hear what they need. That isn’t a reflection of you; it’s delivering something to them. Each person could well need different things, even contradictory things. By shifting away from a binary outcome — you’re doing something right or wrong — you’re able to unemotionally modify your behaviour to who you are interacting with.

The nice thing about getting this right is that, in my experience, it works across generations, in all kinds of office environments. I regularly have my own team members do this with each other, and they tell me that they find it valuable. Whether you’re trying to improve the experience of your team or your clients, or even (gulp) your family, you should find that the way you seek and gather the feedback will improve results for both speaker and listener alike. While The Beatles did trip into a famously useful employment of feedback in “I Feel Fine”, perhaps leave such happy accidents for the musical geniuses. For the rest of us, it’s best to step back from the mic.