Why Using 360-Degree Feedback in Performance Evaluations Gets Poor Marks 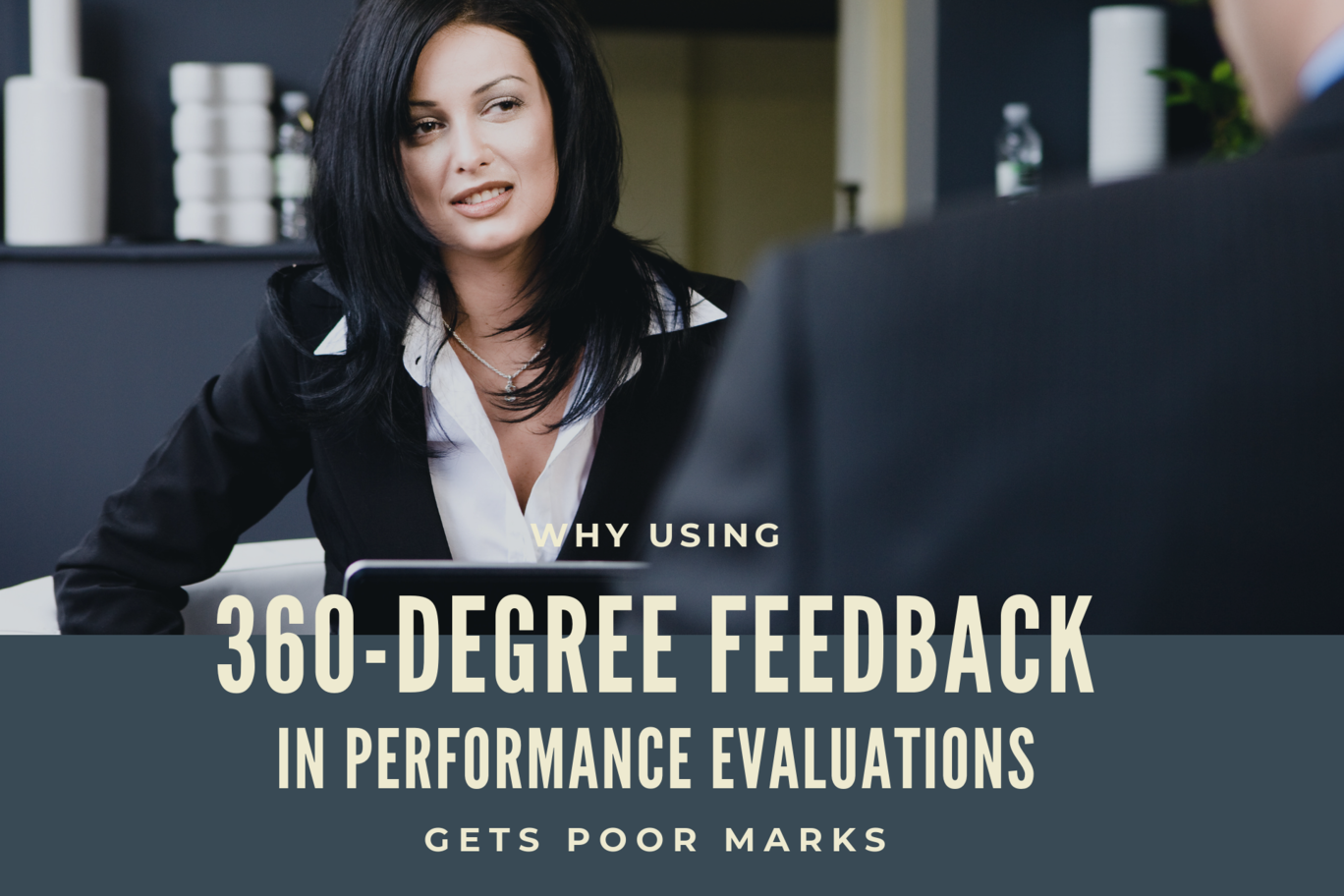 First in a two-part series. This is the first of two posts about 360-degree feedback in performance evaluations. This week we discuss why this method of assessing performance is problematic. Next time: better ways to use this feedback to improve individual business relationships.

Someone asked me recently about performance evaluations, specifically, whether 360-degree feedback in performance evaluations was useful. The argument in favour of them is that by getting a feedback from not only your manager, but also your direct reports, internal clients, external clients, peers and . . . whomever else you can find with an opinion, you’ll have a more robust picture of your strengths and weaknesses. You’ll possibly see trends in the feedback, so it’s more reliable than comments or scores from just your direct manager, for example. So, probably useful, right?

Nope. Not really. Afraid not.

Here’s why 360-degree feedback in performance evaluations is not very useful.

Hearing impairments. One challenge with 360-degree feedback is that you are merely amplifying the challenge with any feedback. It’s not necessarily your strength or weakness; it’s simply a readout from each person of what they consider a strength or weakness. That might seem obvious, but here is the problem. That doesn’t tell you what you really need to work on in some objective sense; it simply tells you what each person needs from you. As my colleague Ashley Goodall and his co-author Marcus Buckingham say in their article on the flaws of feedback, “humans are unreliable raters of other humans.”

If, for example, Samantha says she really values how you keep your communication brief and to the point, and Samuel says he would really benefit from understanding more context around your requests . . . what can you really take away from that? You aren’t necessarily doing anything wrong or anything right. All you’ve learned is what each of those individuals respond to. One person wants you to say as little as necessary; the other wants you to say as much as you can. Good luck with that.

Get more strength. Not less weak. Most of us have been told at one time or another to work on our weaknesses. In theory, it makes sense. In reality, it often all ends in tears. After all, you’re working against your instincts. When we’re in school, this logic is less complicated – some of us excel at maths, some at languages, some at the arts. We work hard enough at our worst subjects in order to complete the requirements, and then we move on, never to touch them again (hopefully).

Usually, we double down on what we’re good at, distancing ourselves from what we’re not. And we’re happier for it. We tend to like what we’re good at and we’re good at what we like. And there’s plenty of evidence that everyone wins when we focus on our strengths, not our weaknesses. When you try to improve your weaknesses, you’ll probably just become less bad at something, not really good at it. I’m not as bad as I used to be, bragged no one ever.

Workplace workarounds. But sometimes in the workplace we lose sight of the rather obvious solution, to simply focus on our strengths, especially when we hear critical feedback from someone whose opinion we value. And this is particularly dangerous in the context of a performance evaluation where their opinion is not only important, but possibly consequential. We begin to believe that we need to be great at all aspects of the various inputs necessary to do our job.

But why? In today’s business world, you could need a dozen different skill sets to truly perform. Let’s say you’re head of a sales team. Ok, so you need management skills, which include communication, mentorship and time management, at least. You’ve got to be good at sales so add on persuasion, extroversion and maths. Add on some technology and cultural sensitivity and . . . on and on.

It’s simply not realistic to be able to do all of those things equally well. You can’t abdicate responsibility for those things, but you can certainly delegate them. Turn to a tech-savvy team member to lead the training on the new software, or find someone with a penchant for numbers to help with the budget planning Meanwhile, you do you, as the kids say. If you’re great at sales, keep being the point person for teaching and inspiring others how to close the deal. Take on projects around expanding markets or broadening the product portfolio.

If you want to be better at your job, stop using 360-degree feedback in performance evaluations.

What we’ve discovered is that 360-degree feedback, like any feedback, simply tells us what others think about us. But of course, each person has a different lens, their own perspective, on what they see and hear when they interact with us. And hearing from a dozen people doesn’t sharpen the focus; it just expands the number of views.

So what’s the better use of 360-degree feedback? We’ll go into specific suggestions next time, but the idea is less about using it as a performance evaluation tool, and more about improving individual relationships.

Next time: The second in our two-part series on 360-degree feedback will focus on how to use that feedback to improve relationships with your team, instead of grading job performance.