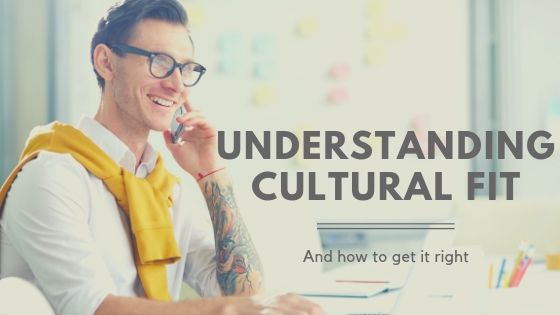 The other day, a friend of mine told me about a new employee at her office. The woman on first glance was just another twenty-something new hire with what my friend called “appropriate business look”. Apparently the woman had an unremarkable hairstyle in a natural-looking colour (“no streaks of purple or green”), simple jewelry (“only her ears were pierced”), and a tailored, silk blouse. At the meeting, she was articulate and well-informed on the subject matter, with insightful questions and useful ideas. Then, when she raised her hand to make a point . . .she revealed a sleeve of tattoos on each arm. “I felt badly, actually, because when I saw that, I wouldn’t have thought she was a good cultural fit for us. We’re pretty conservative,” my friend admitted. She conceded that the woman’s initial appearance seemed to match her expertise, but her body ink seemed contradictory.

Cultural fit still works, but think of it as cultural add.

My friend’s story is just one of the challenges of getting cultural fit right. People have a tendency to let the true intent of cultural fit morph into something far less productive and contributory than its original purpose.

Cultural fit’s military past is now “at ease”. For many years, being part of a company was modeled similarly to being part of the military. The ideal of being a “cultural fit” meant that employees with similar backgrounds, outlooks, and experiences would be most productive. The idea was that these commonalities made it more likely that workers would get along with each other, understand each other, and have ideas and solutions that made sense to everyone. They would even want to “go out for a beer” together, and informally collaborate after hours on work-related matters.

That wasn’t illogical – for many generations, the mostly male workforce had served in a war prior to their professional lives. Falling in line, thinking like a single unit, having the same instincts, was not only productive, it was vital in traditional military training. You don’t need group think when you’re in a foxhole. A diverse set of ideas that are inclusive and sensitive are subsumed by one unified goal — to stay alive. I’m not being flippant – let’s face it, life or death situations do wonders to clarify the mind and unite the group.

But Generation X became the first generation not to serve in a major war. And combined with Millennials and Gen Z, the workforce is now overwhelmingly comprised of those who do not have traditional military experience. Not only is the experiential link between military life and the corporate world gone, even within industry, the needs of business have changed. (And for that matter, so have the needs of the military – see General Stanley McChrystal’s book, Team of Teams for a great articulation of the changing strategy of modern warfare). Today, consumers are more diverse. Business is multinational, multicultural, and multigenerational. In fact, a group of people that have uniformly similar backgrounds, beliefs or interests would be a disadvantage in an increasingly globalised business environment. Fortunately for all of us, the definition of success is more complex and more multipronged than the goal of mere survival that one faced in a war zone fifty years ago.

In today’s environment, cultural fit still means someone who can help the company meets its goals, utilising the same definitions of success as others in the organisation. In my friend’s example, her tattooed colleague sounds like she was a cultural fit – impressive, well-spoken, fluent in her area of expertise. My friend also acknowledged her own dangerous bias – she would have lost confidence if she’d seen the woman’s arms, before she heard the woman’s brains, so to speak.

Focus on the gap in your needs, not in yourself. The goal is to look for people who can fill in the spaces you can’t. Don’t think of the differences as the gap between you, but actually narrowing the gap between yourselves as a team and the mission you are pursuing. After all, if you speak German and Japanese, hiring someone who speaks Portuguese and Cantonese expands the number of people you can speak to collectively. If you understand the needs of the Gen X market in the UK and your colleague is an American Millennial, you might not have a lot to discuss at the pub. But together, you can effectively reach a wide consumer base.

What are you trying to cultural fit them to? Are you trying to fit to people with the same backgrounds, experiences, age cohort, lifestyle? Some of those factors are legally dodgy things to do, and you hopefully know to steer clear of. But others might feel right instinctively – working mothers might seem a natural fit for your baby food business, but what about someone who can tap into a growing market of male primary care givers?

To what time are you trying to cultural fit them in? Are trying to fit to the cultural dynamics of what the company was in the past, even if it’s that past that got you to now? Even if you’re looking for people who fit in with who you think the company is right now, ask yourself if what you have right now is the right type of employee for the future. In America, the National Football League is an all-male sport, but women are the fastest growing segment of American football viewers. You can bet that the NFL marketing team hires women who understand that segment. Sure, those women won’t have war stories to share of their own personal college football team days — but you need to focus on what they can bring to the future of your business, not relate to in your personal past.

Cultural fit is important, so get it right.

You want to fit to your company’s core values, so it is vital to hire people who reflect whatever those are – creativity, boldness, collaboration, innovation. Or whatever else your organisation’s cultural fit requires – just be sure to recognise that each person’s path to those goals might be different, based on different experiences. The important thing is to preserve and build on the values of the company and retain the corporate culture. If you don’t do it thoughtfully and by design, you will still build a culture – just not the one you want. Cultural fit doesn’t have to be a bad term. And you don’t have to look for people that aren’t like you; you just have to be aware of your own biases when you do meet them. And you can still trust your gut about people you don’t like because they seem unkind, or lack ambition or are impatient. After all, your own experiences and perspectives are still valid – and you should continue to value your contributions, even as you learn to value others’.