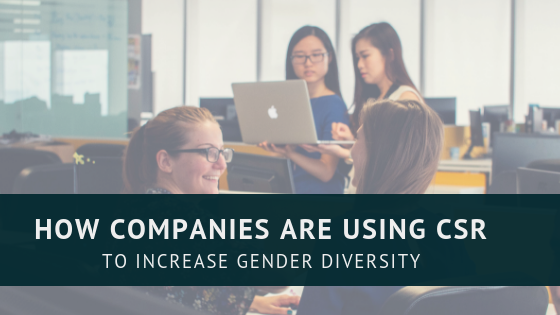 Often when we talk about tech companies, we envision cool, fun places — foosball tables, standing desks, and canteens stocked with fair trade coffee. The stereotype of Silicon Valley might be young, irreverent and international . . . but it’s also very male. Maybe that’s because only 19% of computer science graduates in the U.S. are women.

In an effort to increase female employment, some tech companies are using CSR to increase gender diversity. This might not be an obvious solution. What is the relationship between corporate social responsibility and hiring more women?

How and why companies are using CSR to increase gender diversity.

Embracing the solution might be easier than understanding the problem. At its most basic, recruiting women into tech companies is difficult simply because there are far fewer women specialising in computer science and related fields. In the UK, girls comprised less than 10% of all students taking A-level computing. Companies can use CSR both to target the small number of female technology candidates in the market, or as a way to get under the harrowing number of factors that creates the situation.

You’ve got issues. One thing that is appealing about using CSR to increase gender diversity is that there are countless social issues and causes to support, and certain issues disproportionately impact or attract along gender lines. While a company cannot easily change its principal service or product lines (and thus the skill sets required); it can change or add to its CSR portfolio issues that resonate more highly with women. For example, efforts to increase generally the education of girls, are likely to appeal to most women, regardless of their academic field. More directly, supporting programs that encourage female students to pursue computer science in particular both aligns with the target demographic politically as well as actually seeding future classes of recruits.

Purse power. Another power of CSR is a bottom-line analysis – consumers more than ever are making choices about which companies they purchase goods or services from based on that organisation’s support of certain issues. CSR efforts that appeal to women as consumers are a first line of introduction to those who may become potential employees. We’ve discussed previously that Millennials in particular want to work for companies who make a product they believe in, and Millennial women certainly buy technology on a closer parity than they study it. In theory, of those women consumers, some have a tech background, and there’s a competitive advantage of attracting loyal users as eventual employees.

Lost leaders. Another aspect is not only recruitment, but retention. Millennial employees, when considering their job satisfaction, generally prioritise the opportunity to have an impactful role on CSR program choices and strategy – leadership or influence beyond mere participation. Combine that with the fact that women – including Milleninial women — particularly struggle to be identified as leaders. Women may be more attracted to organisations (or more likely to stay at them) where they see a competitive advantage to gain leadership opportunities in female-related CSR efforts. If an employer participates in causes that affect women in particular, they’re likely to want women to help structure that participation. (One would think, anyway.)

Whether or not using CSR to increase gender diversity will ultimately be successful is a long-term test.

Whether you are ruthlessly cynical or carelessly optimistic on how much various CSR efforts could actually shift the number of women in tech, we won’t likely know who is right for a long time. The number of women in tech fields is incredibly low, so the immediate impact has fairly limited upside. And for the female students who are the workers of tomorrow, as long as those A-level numbers don’t come up, neither can hiring. But on a more generous note, the last two letters of CSR are supposed to mean that there is a responsibility owned and acknowledged by companies to be part of the solution, even while we remain unclear on the problem that landed us here.

Category: HR
Tags: CSR, diversity, gender diversity, hiring, HR, inclusion, recruiting, technology
Previous Post
Get Prepared for Gen Z — By Going Back, to the Future
Next Post
X Marks the Spot: Why You Need to Recruit and Retain Gen X