Things are Tough All Over: Challenges for Working Women Around the World 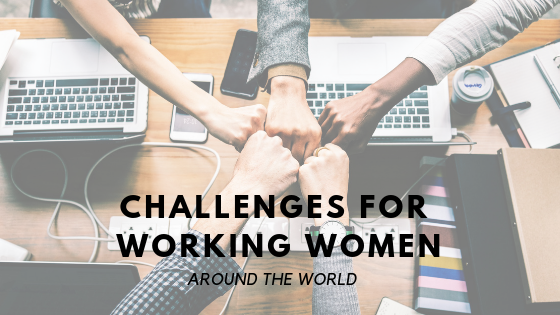 The question of challenges for working women worldwide is simply a matter of degree, not of existence.

A 2015 study by Thomson Reuters of over 9000 women across 20 countries found that their primary concerns were consistent. Major issues included the ability to have a family and a career, harassment at the workplace, pay equality, and continued advancement or promotion throughout their working lives.

Pay equality is one of the most fundamental concerns to women everywhere. In the U.S., 40% of American women named it as a major issue. It’s a simple, but profound, metric — are women equal to men with regard to their perceived value.

That doesn’t mean, of course, they are treated well, or even the same, as far as day-to-day experience. But on the crudest level, women want at least the same economic benefit as men. However, we know that simply isn’t true. In both Canada and the U.S., women on average earn 82 cents for every dollar a man earns.

Across the EU, the gap is about the same — 19% — though certain countries are slightly better, like Austria, at 15%, and the UK at 16.8%. Nowhere is the gap eliminated. But according to recent reports the gap in Belgium is just 3%, and some studies say it’s as low as one percent. How have they done it? Quite simply, it’s the law – and it’s strictly enforced. (The less simple answer can be found here.)

While pay is one of the most gender-neutral, transactional definitions of job success, balancing family and career overwhelmingly affects women more than men. From the basic physical limitations of pregnancy, to the economics of paid or unpaid maternity leave, to the political price of absenteeism due to family obligations, women face issues very distinct from men in this regard.

Interestingly, women also face it very distinctly by country. In Brazil, 74% of women surveyed felt they could have a family without it damaging their career, compared to 29% in the UK. And 63% of Indonesian women were optimistic about being working mothers, versus just 17% of women in Japan. While not a perfect correlation, there was a distinct trend that some of the most robust economies were negatively associated with women’s confidence about having a family and a career.

The positive response in Canada and the U.S., at 40% and 42%, respectively, were the middle ground — more optimistic than all of Western Europe and Japan, and less so than almost everywhere else.

One explanation for better work-life balance in developing economies might be more traditional family structures. Those women more often cited the resources of extended family, and the rewards of motherhood. In places like the U.S., the economic burden of hired childcare might only be outweighed by the emotional impact of “outsourcing motherhood” to a stranger. It’s quite different for working mothers to learn about their child’s first steps from their nanny, than it is from… well, their own mothers.

Harassment of women at the workplace – and in life generally – remains a major problem worldwide. A third of women in the study said they had been the victim of harassment at work. At the office, such events are further exacerbated by unavoidable and repeated interactions with offenders. And such harassment creates another difficult decision — reporting it could lead to retaliation, alienation . . .or just no action at all. In India, 53% of women said they would report the incident. That’s hardly inspiring, but women in the U.S. came in at a distant second — just 27%. And only 7% of women in Russia would tell someone at work.

The challenges for working women are heard around the world. So are the solutions.

Can regions learn from each other? What makes women in a single country twice as more likely to report harassment than everywhere else in the world? How can multinational companies play a role in closing the pay gap in all countries in which they operate? The answers won’t come easily; they never do. But at least they may be out there, somewhere.